Well then, we are doing this hun! Yesterday was pretty busy, even though I didn’t step foot outside my apartment there was never a dull moment. It’s Christmas Eve, yay! The Christmas parties are gonna be in my house, we the people here are going sort of insane. My Christmas wish? To be able to put up the layout I made for this site instead of using this awful layout made by blogger, it’s so cool, it features my 3 favorite opera performers, Juan Diego Florez, Diana Damrau and Joyce DiDonato. And Blair Waldorf ‘cause she’s awesome hahaha.  OMG! It's a Christmas miracle! I got to put up the layout, it's not exactly the way I wanted, but it's there at least! New Christmas wish, to be able to watch Drama Queens: Larger Than Life which is so not airing here in Brasil :( You see why I complain so much about this country! Another thing I really wanted to watch was the Tucker Gala, well, I didn't, did I? The best I could do was follow what was happening on twitter, oh life!
Now let’s stop the ranting and get down to some serious business, yesterday I watched my first production of Handel’s Hercules. And since I’m a super fan of Joyce DiDonato’s (you people will notice this from an early stage since I’ll probably mention her in every post) I’ll always prefer to watch the productions that she’s done. Just to make it more organized I’ll put the cast list up.
William Shimell (Hercules)
Joyce DiDonato (Dejanira)
Toby Spence (Hyllus)
Ingela Bohlin (Iole)
Malena Ernman (Lichas)
Simon Kirkbride (Prist of Jupiter) 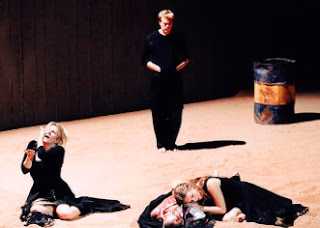 I really liked it, I was very confused at first, since it wasn’t a traditional setting and I didn’t know the story I got a bit puzzled but then I realized something quite ridiculous. I’m a big big fan of these fantasy reality books like Harry Potter, Lord of the Rings, Percy Jackson, I mean BIG time fan, I absolutely love it, my adolescence was practically based on Harry Potter and Lord of the Rings alone. So I’m reading the new Percy Jackson book and there is a part where Jason (a son of Zeus, Jupiter, actually since he’s roman) and Piper (a daughter of Aphrodite) go to this island where Hercules is. And the continuing chapters tell a little bit about Hercules and his wife, and Nessus, and it wasn’t until like the middle of the second act that I made that connection, that I actually knew the story because I had read it in Percy Jackson. And if I’m not mistaken Dejanira kills herself at the end. Now that should have been in the opera, it would have been a KICK ASS aria! Not that “Where Shall I Fly” isn’t kick ass enough, it is. As my singing teacher told me the other day is a awesome mad song ‘cause it’s a mezzo’s mad song, needless to say that my teacher is a mezzo, I’m a soprano, but I agree with her.
Anyways, watching the whole thing I had only already seen Joyce DiDonato, Malena Ernman (in a wonderful production of Dido and Aeneas) and Toby Spence (in Barber of Seville same setting as the wheelchair Barber but with no wheelchair and a darker shade of blonde on Joyce’s head) perform before. 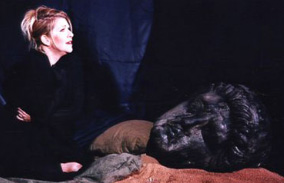 Something that made me uncomfortable, and please, this is not criticism, I don’t write critics, I prefer to write about the good stuff and that’s it! Anyway, what made me uncomfortable was the sand, the stage was filled with sand, and I’m from a seaside town, so I know how sand can work its way through your clothes and itch endlessly. I actually felt sorry for the guy playing Hercules because he was lying on the sand wearing fake blood, and man, fake blood looks really good, very real, but it feels very gross against the skin, again I speak with experience, I already wore that, and it’s not pleasant. Imagine the fake blood with the sand getting all clingy on your face, and you have to sing and die, kudos for our Hercules, that was heroic.
But the highlight of the opera was without a DOUBT Dejanira’s “Where Shall I Fly?” it was the only aria that I already knew prior to watching this, but it was exquisite, and so awesome to actually understand why she was going crazy! And Joyce goes crazy like no one else! Just superb! The chorus was also really really good, they really did sound as one, and is a passage where they do several subto piano that I got goose pups all over, well very done indeed.
Posted by Bela at 8:37 AM 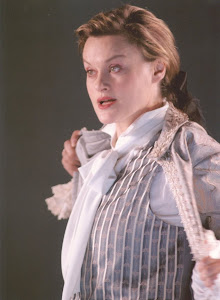